For copies of these or other publications, contact Dr. Wittmann at jw@childcustodyforensics.com

This article proposes a four-level model of clinical inferences to analyze the psychological evaluation process in contested custody and visitation matters. At each level the authors summarize the status of the psychological literature that can be brought to bear on the issues before family and matrimonial judges and conclude that, as clinicians begin to respond specifically to the central issues in such matters (e.g., who should be the custodial parent, when children should see their other parent, etc.) the empirical foundation for such conclusions is tenuous at best, and often non-existent. An argument is also made that, on the basis of important evidentiary and jurisprudential concerns, such opinions should be routinely excluded from the fact-finding process. Given the significant potential for specific custody recommendations to affect and limit personal liberties and the trajectory of a child's life, and given the paucity of relevant research available in this area and the profound evidentiary issues, such recommendations should now be viewed as ethically inappropriate. A model for what clinicians can ethically say to courts in custody matters is proposed. Tippins,

The call issued by Tippins and Wittmann in 2005 for a radical re-thinking of the role that mental health professional play in custody matters generated intense controversy and scholarly debate. In this "response to the responders" each major counter-argument presented by multiple practitioners and scholars in the field is discussed and analyzed.

A hallmark of effective and trustworthy forensic work is the evenhanded and fair-minded (1) interaction with litigants, (2) collection of data, and (3) interpretation of what we have learned about a family. "Bias," in the broadest sense refers to an emotional or cognitive inclination that interferes with an unprejudiced consideration of the data that has been gathered. An evaluator may unconsciously favor fathers and this quickly becomes evident in his disdain for some of the mother's assertions. Another evaluator may set herself up for a preference for the mother's position in a case simply by interviewing her first, and repeatedly, in advance of ever seeing the father. Another evaluator may enter an assessment with firmly held pre-conceptions about what is good and bad for children (eg, the family bed is bad, young children should be with their mothers, etc) despite the fact that the empirical research in his/her discipline fails to support such ideas. These cognitive sets and assumptions, however formed, create a kind of lens through which data that is gathered on a family is processed and interpreted (with the very real potential for errors to be made at the stage where the court is being given an evaluator's "bottom line" about a particular child's needs or a particular parent's skills/capacities). In this article Dr. Wittmann defines and discusses 15 forms of bias that can infect the custody evaluation process to the detriment of children, their parents, and the courts. 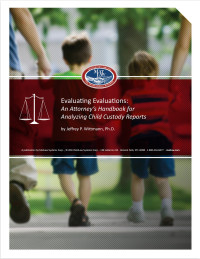